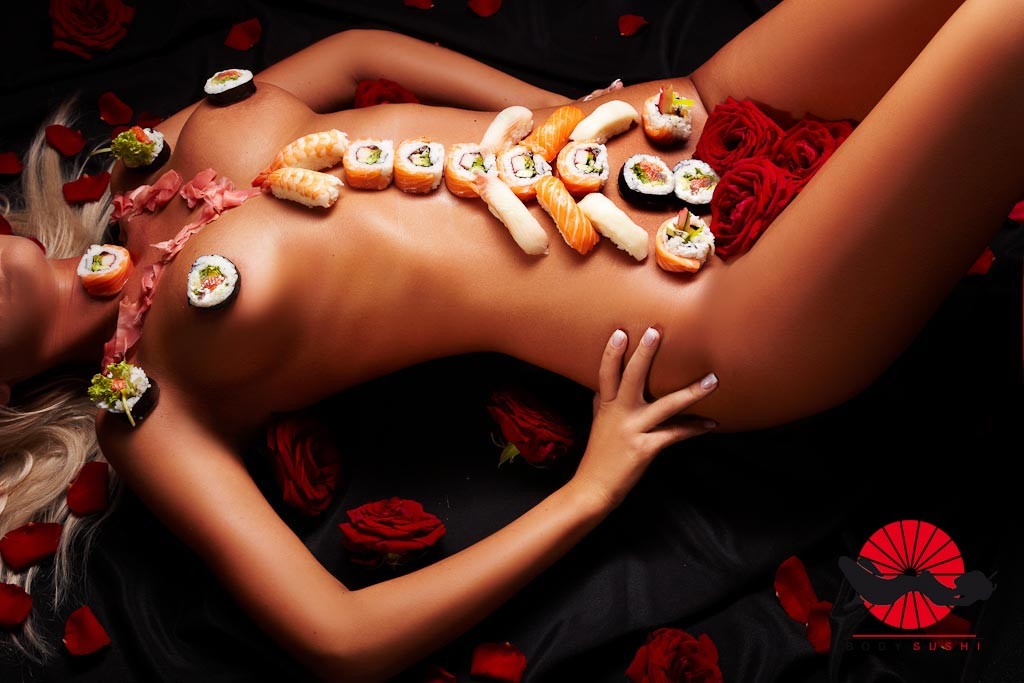 She thought it would make the job easier, being covered up, but she thought wrong. A maki roll over each nipple, the ebi nigiri across her rib cage, futomaki down her stomach and sashimi covering her mons pubis made her feel more naked, not less. Having it stripped away by wealthy businessmen, each piece elegantly removed by well-handled chopsticks… that was just icing on the shame-cake.

A decade before, a girl like her could have made ends meet on the street corner. It would have been dark, hurried, impersonal. A couple of sloppy blowjobs, a few minutes of dry thrusting in a back seat, and she would have had enough cash to cover rent. But now there were sexbots for that, dead-eyed women of perfectly toned silicone– which was what the johns had wanted in the first place. She didn’t have a voice box that could be turned from sweet and innocent to rich and sultry with the flip of a switch. She was flesh and blood, imperfections and skin flushed pink with embarrassment beneath the white imitation geisha face paint the Sushigirls had to wear as a man with a deep frown line in the middle of his handsome brow traced the tips of his chopsticks up her thigh.

If she hadn’t been laying down, she would have trembled.

He had an ad man’s haircut and a thousand dollar suit. He’d been a regular since before she started working at the Floating World sushi parlor, where the businessmen entertained their clients with the rare delicacy of perfectly prepared tempura and nigiri eaten off of real, live naked women. But after  the first time she had laid at his table, looking elegant as his business partners chuckled and plucked California rolls off of her collarbone, he had requested her every time since. She didn’t know why– she wore the same white face, black eyeliner and red lips as any of the other girls, and laid there just as still– but she had become a regular at his table, and he came nearly every night now.

His chopsticks lingered at the shallow valley where her thigh met her sex. She was meant to keep her eyes trained on the ceiling, but she let them stray to see the look on his face. Her gaze was met with steely grey eyes. He’d been watching her, waiting to see if she reacted. Briefly, she wondered if it had been a test– then one of his business partners tweaked her nipple with his chopsticks, and a roar of laughter followed as he played it off as a mistake. Her grey-eyed patron smirked, but he didn’t join in. Instead, he peeled the final piece of swordfish sashimi away from skin and raised it to his mouth. He ate it like he was tasting her, obviously savoring the salty freshness of the meat.

She loved him, she realized. Not true love, no, but something akin to it. She loved him even as his chopsticks returned to stroking her inner thigh, which wasn’t allowed. The clients weren’t supposed to touch the Sushigirls, only the sushi– but he was a man who didn’t seem to care for rules.

They all left in a hurry, sorting out whose suitjacket was whose in a bluster of designer labels and expensive cologne. No one wanted to linger for long after dinner was done. She supposed, in the grand scheme of things, she was just an appetizer for their evening– their main course was attached to chargers in the robo-brothels down the street, girls with silicone lips who had been programmed not to say no.

But the man with the grey eyes stayed, long after his companions had gone.

Her body felt dirty, sticky with soy sauce and lingering saltiness. Her patron didn’t seem to care, though. Not as he rose from his seat and rounded the table. Not as he grabbed her hips and pulled her to him, so she was just at the table’s edge, her legs spread. He didn’t seem to care about anything, really– not the rules, not his business partners, and certainly not about the sexbot brothel down the road– only about her, her body, the unspoken desire between them that felt as real and solid as a silver chain collared around her neck and held in his hand.

His tongue was dark pink and warm as he licked his lips, then licked hers, up and down and up and down until she could have begged him to take her– but she didn’t have the words. He pushed his tongue between her pussylips, claiming the salty sweet wetness between them. His tongue traced along her labia minora until her thighs trembled. There was a whimper that she held in her mouth for as long as she could stand it, but when his lips found her clitoris, it eased out of her desperately. His fingers teased her entrance, and against her will her hips bucked wildly as he pressed them inside of her.

She came hard, his perfect hairstyle ruined in the clutches of her fingers, his lips covered in her juices, her ankles crossed against the crisp collar of his dress shirt.

When he smiled up at her, the frown line between his brows seemed to have momentarily disappeared.

“A tip,” he said, as if that explained it all. He kissed her lips gently once, and then rough and full of longing. His tongue tasted like her, and like saltwater and sake.

“Next week?” she asked sweetly. Her voice sounded breathless and hopeful and small.

“Soon,” he promised, and then he was gone– before the bouncer or one of the other girls could discover the secret of their brief tryst. She watched him go, still tasting him on her lips. Sushi would never taste the same again.

This has been a Wicked Wednesday post, highlighting my deep yearning for some good sushi and even better sex (I’m home for the holidays and alas, landlocked again). Wicked Wednesday is on Week #182, brought to you by the delectable and most admirable Marie Rebelle of Rebel’s Notes. As for me, this is week #2. Check out the other entries and drop me a comment or something 😉 xox

6 thoughts on “Sushigirl in Love #WickedWednesday”